Something of a Holy Grail, per se, of D&D combats in my experience is a workable, simple called shot system.  I have worked up the following and think that it’s really quite simple, with a decent risk-reward balance and appropriate deference given to higher level characters.

A called shot is a full round action that targets a specific part of an opponent’s body. Called shots may be declared against any non-amorphous corporeal opponent.

To perform a called shot, a player first declares his intention to call the shot (called “Calling the Shot”). Then an attack roll is made against the defender’s normal AC. If successful, he then rolls the called shot percentage, which is 5% for every point of Base Attack Bonus of the attacker, minus 5% per point of AC bonus if armor is worn over the called out body part.

If the attacker rolls over the Called Shot Percentage he misses, is overbalanced, and cannot attack next round. If he rolls under the percentage he may roll critical damage. If the damage rolled (after the armor’s damage reduction is applied) is greater than or equal to 25% of the target’s total HP, refer to the following table. 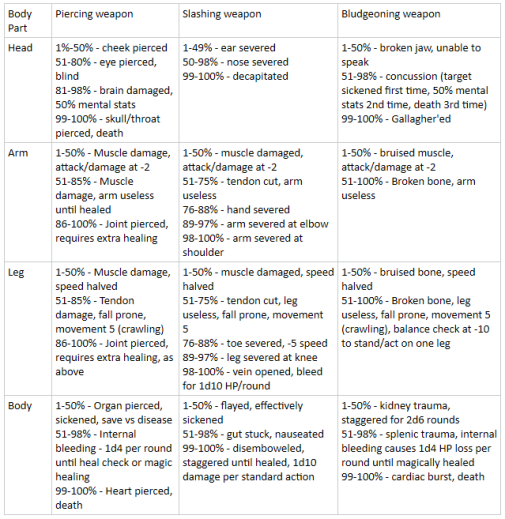 Other effects may occur based on local conditions.

If you prefer, instead of using Base Attack Bonus to drive the CSPercentage, you can opt to use character level instead (this option might be attractive for you 5e folks).

Or, to make the table more deadly, you may opt to increase (or decrease) the table percentage roll by up to the level of the character making the attack.

So there you have it: called shots in a small, easy-to-swallow pill form.  You’re welcome.